Highlights of the year

The musicians that I admire for their strangeness, honesty, charisma, humility, style, who take a risk and have fun, who are passionate and don't fit any particular music category or trend.
Mac DeMarco

2014: The most memorable music videos 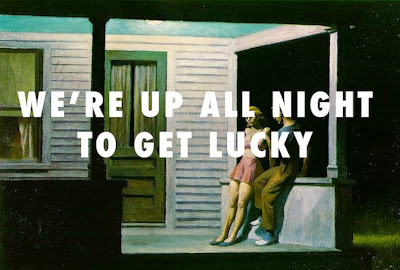 The year is ending. It's time to get drunk, forget everything and only remember the GOOOOD things. Let's party! Pop the music in a glass of champagne.
But, what kind of music? A good party needs good music. Let's play something that everybody knows. Daft Punk! Here we go. Daft Punk is everywhere. Daft Punk's music is in every single party, every single bar or club. On TV, in your Ipod, in your laptop... Daft Punk is democracy, it appeals to everybody. Even your granny.
So here we go, let's play "Get Lucky".

You've had enough of it? Are you sure? You moan because you hear it everywhere. Relax a bit and wait a few seconds. What? You paused it?! Haha, see? Your friends are angry. Why did you pause it? You felt bored and lonely. Your friends were having fun. Too much fun and Daft Punk made you a tad bit jealous... They are cool even 15 years after the release of their first album. They manage to bring an unique sound that gathers everybody around good memories. The melodies get into your head, vibrate in your body and stick with you like a second skin. Can you feel it?
Back in the 90s, Daft Punk heavily influenced dance music with "Homework". They release their latest album "Random Access Memories" at the end of 2013, 15 years after "Homework".
"Random Access Memories" takes a completely different approach from the previous albums, with a sound that takes you back to the late 70's and the early 80's where soul music was merging with disco and funk. The musical style was recognisable by its relaxed tempos, soft melodies and guitars, funky, joyful bass lines.
If you like Daft Punk's new album you will enjoy these timeless goodies:


Looking back in 2013 and 2014 I felt spoiled for choice. Internet gives an unlimited access to music and it is BRILLIANT. On the other hand, digging for the good stuff, is like digging for a tiny piece of gold in a massive field of shit. The artists follow a trend that is rather uniform. There's no risk takers. Is the world wide web killing the music industry? Anyone could be a musician. You can play, record and put music on Soundcloud in less than 30 minutes.
There are so many bands I discovered and enjoyed listening but I will probably forget the majority in few months time. Thankfully, few stand out of the crowd. With the internet, it's easier to create a buzz around something but it dies as quickly as it appeared. The challenge is to last, to be original and create a movement. Since the end of 2013, I noticed that many bands followed a very specific music style. There is a trend in music as there is in fashion. Perhaps the musicians below were inspired from the genres that influenced Daft Punk itself?